The wonderfully photogenic Vakil Bazaar is Shiraz’s main market place and home to hundreds of shops and stalls. Satisfyingly labyrinthine, the bazaar is the place for buying rugs, spices, jewellery, and household goods. Stumbling across teahouses, courtyards, caravanserais, and the traditional bathhouse, you may need more than one afternoon to explore the entirety of the Vakil Bazaar. The vaulted arched ceilings are a fine example of 18th century Zand architecture, and make for a pleasantly cool atmosphere through which to meander. Shiraz is famed for its cultivation of fine gardens, and Eram is arguably the model par excellence. Eram falls within Shiraz University’s botanical gardens, and is replete with cypress trees, trimmed hedges, and rosebushes. At its centre is a small pool and a splendid Qajar-era palace, though it is closed to the public. The garden is located just north of the Khoshk River, opposite the university.

Hafez is arguably the most loved and respected poet in the vast canon of Persian literature. Considered the master of the ghazal (a short, amorous, rhyming poem), Iranians from all walks of life can quote his verses on demand. His tomb resides in a well-kept garden in northeast Shiraz; more than a tourist attraction, it functions as a site of pilgrimage for his admirers the world over. Have your fortune told, visit the onsite teahouse, and contemplate the playful nuances of his lyrical ingenuity as you wander around the extensive grounds.

The 13th century poet Sa’di was an important precursor to Hafez, and is one of the most cherished ancestors of modern day Shirazis. Many of his pithy maxims have attained a proverbial status, and he is widely praised for the enduring simplicity of his verse. His tomb is less busy than that of Hafez, but is located nearby and worth visiting on the same day. The underground teahouse offers a cool spot to refresh yourself after exploring the garden of roses and cypress trees. Persepolis, or Takht-e Jamshid in Persian, was the magnificent ceremonial capital of the ancient Achaemenid Empire, over 2500 years ago. Ransacked by Alexander the Great, the site represents the pinnacle of ancient Iran’s political and architectural achievements. The UNESCO world heritage site is located about 70 kilometres northeast of Shiraz, and tours will take you from the city centre on a day trip. The impressive ruins require a good few hours to explore, although take plenty of water, for the midday sun can be pretty unforgiving. 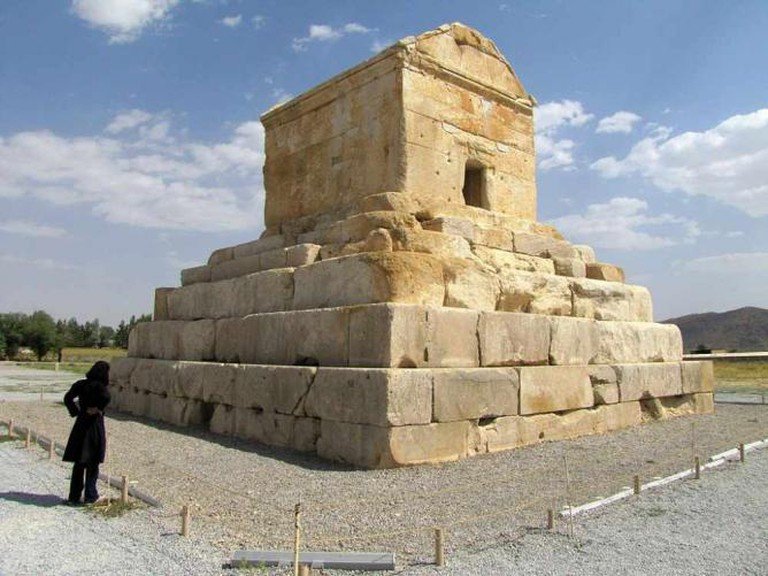 The final stop on your day-trip outside the city should be Pasargadae, an Achaemenid political centre that predates Persepolis. Another 50 kilometres north of its more famous successor, it’s not the most convenient of destinations, but the striking solemnity of Cyrus the Great’s ancient tomb, now surrounded by inhospitably harsh terrain, justifies the effort. The founder of the Achaemenid Empire, his isolated tomb is built upon a broad-stepped base, and was allegedly visited by Alexander the Great himself, after he conquered Persepolis.

A tour to Persepolis should include a visit to the nearby rock tombs and reliefs of Naqsh-e Rostam and Naqsh-e Rajab. The former consists of four massive tombs built into the face of a cliff, an appropriately ostentatious final resting place for four Achaemenid kings. Below you will see some stone reliefs depicting various Sassanian imperial triumphs, such as the Roman Emperor Valyerian kneeling before Shapur I. Four more Sassanian reliefs can be found at the less well-tended Naqsh-e Rajab, only five minutes away.

Located centrally, the citadel (or arg in Persian) was built in the 18th century by the founder of the Zand dynasty, Karim Khan. Having made Shiraz his capital, the citadel was one of Karim Khan’s many ambitious construction projects in the city. Lofty and rectangular, the fortress features four circular towers (which were historically used as prisons), and is more unusual on the inside than the outside. Once inside, you can appreciate the shade of the many citrus trees and the gentle trickling of the central pool, before exploring the well-put-together museum of the Zand period.

Be the first to hear about special offers from Elysee Hotel Shiraz.